My goodness finding time for yourself with a newborn to look after is a challenge but we’re just now getting into a semi routine so I can plan my time a little!

Teddy was born on Sunday 23rd September at 10:50am weighing 7lb 10oz after a straightforward birth, the midwives referred to it as easy but I wouldn’t go as far as saying that! 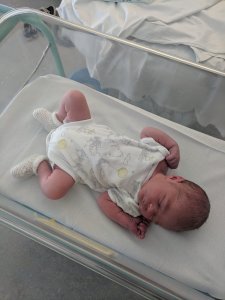 I must say I was surprised about how quickly I picked up motherhood, I haven’t had a lot to do with babies and never changed a nappy or fed a baby so really had no clue about what I was doing. However as soon as I was handed Teddy I guess my maternal instinct kicked in, after all this tiny thing you created is entirely dependent on its parents to do literally everything for it. Dan had a little more experience than me having had a niece, nephew and much younger sister so I did look to him at first.

The first few days of having Teddy my mum came round every day, it took me a couple days to get over the initial lack of sleep so mum and Dan did a lot of the work at first. It took a while to get feeding established as Teddy was just too lazy to work for his milk so we ended up supplementing this with formula to make sure he didn’t dehydrate.

Straight away Teddy had a strong neck, as the weeks have passed its become more obvious how strong he is, as at 6 weeks he already kicked his way across his play mat and could bear his weight on his legs! He also smiled at me properly for the first time and I have spent his every waking moment since trying to get as many as possible out of him!

The lack of sleep has been tough, for the most part Dan has been amazing at helping out with feeds etc but he did struggle initially when he went back to work but getting into a proper routine is a real learning curve. Mostly Ted and I have spent our days cuddling, reading and playing but we’ve already had our fair share of visitors. Teddy’s first day out was to the fireworks display at Beaulieu with some friends which was lovely but also a little stressful. It was super busy and navigating the cafe with a pram so we could sit to feed him was a hassle. We’ve not had any major dramas out and about but in the earlier weeks I was so petrified of him crying and me being judged by other people. In Tesco’s on one occasion he did start a tantrum at the checkout as it was nearing time for a feed. The cashier helpfully pointed out to me the fact that my baby was crying, as if I somehow hadn’t noticed… and continued to suggest he was hungry… I wasn’t exactly able to lob my tits out in the queue to sort it so I’m not sure what she was hoping to achieve by pointing out the obvious, but there you go. Everyone has an opinion, I’m learning to just nod and carry on doing what I’m doing when I’m given advice I don’t need and haven’t asked for. Motherhood has definitely made me more able to stand up for myself and I’m enjoying that about this new part of me.

I haven’t quite and that sense losing my identity yet but I am definitely struggling with how I look and not being able to do much about it. I went back to the gym at 6 weeks and have kept up going twice a week, I’m going to up this to 3 when I can, I’ve noticed a very slight difference in my waist already which is nice. Being able to drop Teddy off with my mum for an hour to workout feels amazing!

All in all Teddy is amazing, he’s not a big crier (although he has his moments) and I am absolutely in love with him. Our little family is exactly how I wanted it and I’m so excited for the future and watching Teddy learn and discover.